2020 marks the Theremin‘s 100th birthday and Moog Music are celebrating with their latest iteration of the instrument, the Claravox Centennial. Leon Theremin with his device.

First conceived in 1920 by Russian inventor Léon Theremin and patented in 1928, the Theremin became a respected instrument in the field of classical music. Its sonic contributions to film scores and early science fiction sound effects made generations of hairs stand on end.

The Theremin’s electromagnetic interface baffled early audiences who watched in awe as a musician played what appeared to be invisible strings of air. Instead of keys and a volume pedal the theremin uses two antennae: the rod antenna for oscillator pitch and the loop antenna for volume. These extremely sensitive antennae give the musician direct control of vibrato to deliver expressive and emotional results. Paul Tanner with the Electro-Theremin.

It took considerable skill to master the Theremin. Although it’s timbre imitates that of a violin, the technique used to play it is more akin to a trombonist. The telescope like slide mechanism on the trombone varies the size of the instrument to change the pitch. For that reason, trombonists were often more instinctive and adaptable users of the Theremin in its early days.

In the late 1950s it was this insight that lead trombonist Paul Tanner to persuade amateur inventor Bob Whitsell to help him develop the Electro-Theremin. Tanner liked the sound of the sine wave oscillators in the original design but lusted after greater control of pitch and attack. The suggestions he gave to Whitsell consequently led the innovator to ditch the antennae in favor of a trombone-inspired slide controller for pitch and a mechanical knob for amplitude.

It was the Electro-Theremin that Brian Wilson would record in 1965 for the album Pet Sounds and again to more critical and commercial acclaim in his 1966 hit single, “Good Vibrations.” Due to the tonal similarities it’s widely misconceived that an original Theremin was used on Good Vibrations which soon boosted the sales of Theremins among a growing psychedelic community.

The Birth Of Moog Music

In 1953, Robert Arthur Moog began his much-renowned career with the release of his own Theremin design. It was originally only available through mail order as a DIY kit where it was purchased by American composer Raymond Scott. Scott modified Moog’s theremin by adding a keyboard to give the instrument glissando capability with adjustable portamento, and he also installed an amplitude envelope to shape the length and attack of the notes played.

In 1956 Scott patented his adaptation of the Theremin as the Clavivox, which in turn inspired Moog to design his first synthesizers.

“A lot of the sound-producing circuitry of the Clavivox resembled very closely the first analog synthesizer my company made in the mid-’60s,” said Moog of the device. “Some of the sounds are not the same, but they’re close.” By the early 1960s Moog’s close association with the Theremin led him to forge a partnership with recording engineer and one-time customer Walter Sear. Moog befriended Sear after he bought parts to build his own Theremin in the late 1950s. This soon grew into a business partnership as Sear used his music industry connections to spruik Moog’s instruments. When Brian Wilson’s cousin, occasional collaborator and touring Beach Boys band member Steve Korthoff needed a stage version of the Theremin, Sear was on hand to assist in the demonstration.

Steve Korthoff immediately discovered it was far too difficult to use the instrument to reproduce the “Good Vibrations” lead melody, so Sear asked him to visit Bob Moog at his facility to further explain what he needed. After listening to Korthoff’s need for traditional frets, Moog constructed a ribbon controller connected to an oscillator that could be played more easily by Korthoff and the band. This reinvention became the Moog Stringer, which was first seen publicly in the promotional film shot for Good Vibrations. 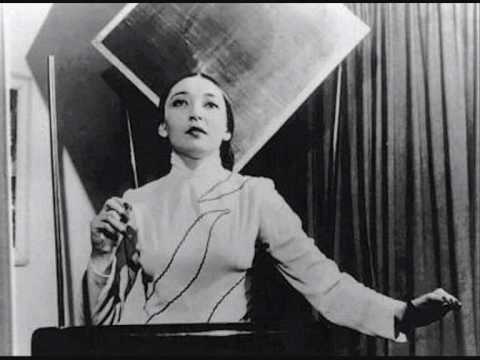 Clara Rockmore performing with the Theremin.

The Claravox Centennial takes its name from  Clara Rockmore, whose virtuoso performances and recordings brought a more sophisticated approach to the instrument. Rockmore used the Theremin to sing like a human voice rather than emulating a violin with the wild vibrato of her many contemporaries.

The Claravox has two modes. Traditional mode uses classic heterodyne oscillators for an authentic Theremin sound while Modern mode uses multimode DSP oscillators (sine, triangle, saw, wavetable) with assignable scales, quantization, octave ranges, and response curves.
An analogue wave-shaping circuit (as used in the Etherwave Pro) allows you to tame and balance the gain of the signal as well as adding saturation to fatten the harmonics. For onboard FX there’s a BBD delay that conveniently gives you a classic analogue delay to echo and spiral your Theremin playing. The Claravox Sentinel with optional stand.

MIDI IN and OUT plus two CV inputs and outputs expand your Claravox as an external instrument that you can program from your DAW, hardware sequencer or even a modular system. This could result in accurate programming capabilities as well as experimental happy accidents.

The Outs convert your Claravox into a sophisticated MIDI/CV controller to trigger and control external samplers, instruments or any device with a MIDI/CV input. An application for this feature that comes to mind would be to use the Claravox like the D-Beam controller that was used in the Roland MC-505. You can accurately calibrate this data to produce the sub bass lines vital to modern hip-hop, house and techno tracks, using your choice of synth or 808 kick samples just to give an example.

USB MIDI is also an option if you wish to use the Claravox without an interface. Alternatively you could just play these sub bass lines live using the onboard generators that cover a five-octave range in Traditional Mode or four to seven octaves in Modern Mode. The video below demonstrates how expressive the Theremin’s controls can be when used for bass lines.

The Claravox has enough specifications to give you these options. The side-entry calibration ports are easy to access for fine tuning adjustments and the dedicated Response knobs allow for the creation of recallable custom antenna curves in Modern mode. Front-panel pitch and volume knobs give fast and immediate control for dialing in to new playing environments.

The front-panel preset storage provides instant recall of your sounds and settings and there’s even a software librarian to back up and organize your presets. This software can also access a host of under-the-hood features.

The Claravox’s retro design gives it aesthetic appeal, although the classic wooden tripod stand is an optional extra. You can use a standard mic stand if you’re not keen on spending extra cash for the full vintage look.

The Moog Etherwave Plus could also be used as a controller with CVs for pitch and volume. These CVs can be patched to any CV inputs of your choice. The scaled-back Standard version comes without connectivity.

The Theramini made playing the instrument easier with assisted pitch control. It carried one CV output and USB MIDI. It’s 32 wavetable sound presets and stereo output broadened the sonic scope of the instrument.

The Claravox Sentinel can be pre-ordered now for $1,499, and it ships out in December. More information can be found on the Moog Music website.

Staff writer for Selector. Electronic music production veteran, citizen of the groove. Wizard of speed and time with a penchant for the funk.